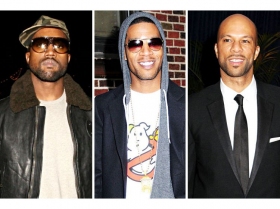 Another track from Kanye West has just been unleashed ahead of his new album release. The song is a star-studded affair with the likes of Kid Cudi, Common, Big Sean, Pusha T and Charlie Wilson on the line-up.

G.O.O.D. Fridays contains piano-driven beat and has great vibe with Cudi repeating optimistic lyrics, "I know the city getting ready for me."

Take a listen to the song below: