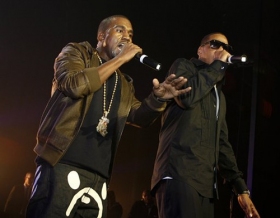 After giving a drama treatment in Runaway mini movie, Kanye West is now moving on to horror in a music video for his star-studded single Monster. In a short preview of the clip, the rapper is seen lying on the bed with what seems to be two lifeless females. He moves closer to one of them for a kiss and places her hand to the crotch of another body.

Also seen in the disturbing footage are Kanye's featured guests Jay-Z, Rick Ross and Nicki Minaj. Captured in separate rooms of a haunting mansion, the three of them have at least one dead body with them. The disturbing music video is directed by Jake Nava and promised to premiere in full sometime soon.

Monster is taken from Kanye's latest studio effort My Beautiful Dark Twisted Fantasy which has dropped to No. 7 after previously debuting at the first place on Billboard Hot 200. Beside having verses by Jigga, Ross and Minaj, the track also features Bon Iver. Here you can read Jay-Z' biography Jay-Z bio