Kanye Proud of His Daughter 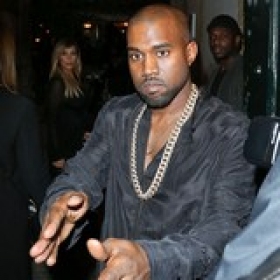 Kanye West is reportedly so proud of his daughter, that he has no complaints against his wife, Kim Kardashian, sharing photos of their daughter on the Internet.

The rapper believes that sharing photos online prevents the paparazzi from making money off his family.

“It's much better this way because they're controlling how much the public sees of their precious little girl,” a source told Hollywood Life. “This is what Kanye wants. He doesn't want paparazzi taking pictures of his baby and making money off her back.”

The site also revealed that only Kanye and Kim are allowed to take and post pictures of Nori. Other family members, including matriarch Kris Jenner, are allegedly banned from putting pictures of North online.

“Kanye's not playing, that's a rule,” the source gushed. “He's not even letting Nori's aunts or grandmother take pictures of Nori [and post them on social media websites] unless they ask or it's like a family photo or something.”

Kanye is a proud father. The musician reportedly thinks his daughter is a genius “just like him.”
“She'll grab things and have this weird look on her face when she's holding whatever object is in her hand,” a source revealed. “Kanye will be like 'why is she staring at it so hard' and then he rethinks and is like 'naw, she's studying it. She sees something we don't. He already thinks she's a genius, just like him.”

“He thinks she's going to grow up and be something great, like a scientist or something. He's loving every minute of her existence and soaking it all up.”