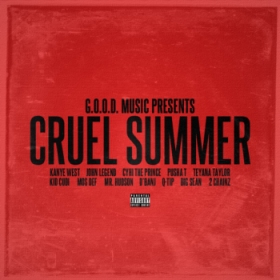 While BET recently revealed the nominations for their annual hip-hop awards, rapper Kanye West, which scooped the most nominees - 17 nods - has unveiled a short promo video for his upcoming project Cruel Summer due to be released with his team G.O.O.D. Music.

The highly-anticipated album is given in a 30-second spot which puts the album's super-artsy artwork on full display, sending it crashing dramatically through a wall before being broken into a hundred little pieces on the ground. All the slow-mo action is sound tracked by the album's hit single "Mercy".

Cruel Summer drops next Tuesday, September 18, but is available for pre-order on iTunes now. Check out the album preview in here.

Meanwhile, check out the BET Hip-Hop Awards nominations in here. The rapper scored 17 nods, mostly for his work with Watch the Throne with Jay-Z, who is also up for numerous awards, while 2 Chainz and Drake followed with 13 each.