We got many psychopathic ninjas on this track

You mess with my own,

I'll turn ya to stone,

Give ya busy tone from an undertaker's phone

I see this ho is waitin for me

I gotta glock that bucks harder than a drill team sergeant

Never been a bitch, always gots to get respected

The target is ejected with the venom from my weapon

Then ya is deceased when I strike ya in jaw

Ain't no time tell yo mama that you love her anymore

Somebody shoulda told ya bout fuckin with a corpse

Rockin a chemical imbalance and a stolen school bus

Full of screamin lil kids, we doin' 90 plus

Jumpsteady in a chopper and away we get

Watchin everybody else fallin over the cliff

It's the tripe X balla

I'm in love wit yo mama

But yo daddy be playa hatin so I don't call her

Mr. Bones, Madrox, who you trippin on?

My appetite is planetary when I'm screamin unicorn

Handled like some lunatics to get into some killer shit

Why? cuz I run wit a hatchet guy

Let me go ahead and check my watch

So I can see how much time you got

Before the hatchet that I run wit swings dowwwn

And splits yo face (shit!)

I understand why everybody wants to be down with me

Psychopathic, we crazier than a muthafucka

ABK in this bitch undercover

No badge, no cuffs, no jail

Detroit hatchet family on the scene

Juggalos, deputies, bitch ya know what I mean

Taking over the world with no means to quit

Legz Diamond in this bitch

Making hair stand up on the back of your neck

I'm comin for you haters, little bitches you are

You can run, you can hide, but you won't get far

Bullets for your credits, runnin yo mouth

How you talkin that shit? You get yo fuckin brains blown out

Your game is weak, the stakes are high, and so am I

I don't live and let live, I take an eye for an eye

Psychopathic ninjas on a killing spree

Creeping in the shadows of eternity

Psychopathic ninjas you will never see

As the phantom blade becomes your reality

This ain't no two hand touch so get yo helmet on

All you might just get planted on yo neighbor's front lawn

We some grave diggers wit the shovels and boots

We on some wicked shit hidin in hubbles and under suits

I'm on a whole different level

Leave you and the devil

I'm not yo priest or yo reverend

But I've been known to bless a mic

That'll make you swear to God I was heaven sent

For a locus, I'm a hundred ton death from above

For a pilot, I'm a 'Ghani with a beard and a trenchcoat

To a paranoid cop, I'm a game of Morton's list

For a crab, I'm an elusive and deadly cuttlefish

At your birthday, I'm Jeff Dahmer bakin a cake

As you ponder why your best friend is three hours late

I can still rock that heater in my back

On the stable on the roof bustin shots with my gat

The surface is scattered with bullets, we flyin through the air

Cuz I leap of da roof, 30 feet without a care

Just to break off my leg and shit

Get up and beat a mothafuckin pig with it

Cuz cops ain't shit, they get they muthafuckin throat cut

And wrapped in bloody sheets and tossed up in my trunk

Raised in the jungle, communicate with snakes

I'll squeeze your throat piece off til it breaks

We'll always be underground, not just at first

And stomp holes in your fuckin lyrics like the goodfellows

Newports and a plan to fuck

Nightclubs in my trunk and my disco balls

And my hatchet in the air screamin fuck y'all!

I'm the urban legend in your back seat

Most people, they look at me and run

Ya know your bed? That's me under it

Pull the covers over your head, I'ma smother it

Then it's back off into the moonlit sky

What you non juggalos gonna do?

We know you see us, a gang of painted faces comin through

You gonna run, you gonna hide

Comin thru your dome, come one and all

It'd be a shame to see a buncha muthafuckas fall

I'm givin props to my homies on the southwest side

Psychopathic family til the day that we die

I'm off into the street slangin them tapes

Shoutout to Double A and the money he makes

Esham, my dogs runnin on the east side

It's the Chaos Theory, cmon get wit it

Psychopathic ninjas on a killing spree

Creeping in the shadows of eternity

Psychopathic ninjas you will never see

As the phantom blade becomes your reality

So how long you been here, old man?

Damn, that's a longass time, you musta got caught up on some serious shit. I'll be out in 3 years. You ever thought about escapin this place?

Sure I do, but ya see those walls and those guntowers and all them guards. Makes it almost impossible for an old man like me to try and get out of here. Besides, I escape every night. Cuz the one thing they can't lock up is your mind unless you let em. And everynight, I can dream. That's when I escape, that's when I escape these walls, and I... 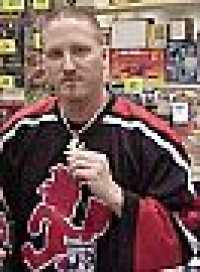