Arguably the quintessential one-shot band of all time, Cafferty and company (who, back in the early '70s, were simply a hack New England bar band) had their 15 minutes of fame courtesy of a ridiculously overwrought 1983 film called Eddie and the Cruisers (starring Michael Pare). The movie dealt with the suspicious death of a fictional singer/songwriter, modeled on a conflation of Bob Dylan and Bruce Springsteen, who had made the transition from smart rock & roller to serious artist. Seems as though Eddie had recorded a brilliant but unreleased album that fused Chuck Berry-style rock & roll with French Symbolist poetry. A record way ahead of its time, the master tapes of The Dark Side went missing, right around the time of Eddie's "death." Needing a band to supply music for the film, the producers used the Springsteen-ish sounding Cafferty and his clock-punching backup band. With the Springsteen-ish single "On the Dark Side" paving the way, Cafferty led, arguably, the most anonymous band with a hit record in the history of rock & roll. With the movie doing reasonably well in theaters and extremely well on video, sales of Cafferty's album -- which, ironically, had been out for months before the band's involvement with Eddie and the Cruisers and barely caused a murmur -- skyrocketed. But, as the movie faded from the public consciousness, so did Cafferty's imitation of Springsteen. John Dougan, Rovi 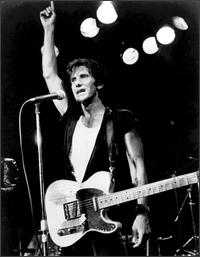