Ivete Maria Dias de Sangalo (born May 27, 1972 age 37) is a Latin Grammy Award-winning Brazilian Axé and MPB singer, songwriter, and occasional actress and television show host. She is one of the most popular and best-selling Brazilian female singers of the present, with six albums released with "Banda Eva",[1] and seven more albums in a solo career, with a total of over 12 million albums sold worldwide. Ivete is most often recognized by her powerful voice, charisma and live performances. Her music is also very popular in Portugal.[2]

As a teenager, started to sing and play violin at gymkhanas, festivals and at presentations of the school where she studied. Ivete Sangalo's debut show happened in Ondina Neighborhood, Salvador, in August 1992. With that show she won the Dorival Caymmi trophy, the Grammy of Bahia music. The solo singer was once part of a group called Banda Eva, and with them she recorded six CDs and sold over four million copies.[3]Contents [hide]
1 Biography
1.1 Beginnings, Banda Eva and early solo career
1.2 Career revival
2 Discography
2.1 Band Eva (1993-1998)
2.1.1 Albums
2.1.2 Singles
2.2 Solo career (1999 - Present)
2.2.1 Albums
2.2.2 Singles
2.2.2.1 Featured Singles
2.2.2.2 Other charted songs
3 Advertising Spokesperson
4 Filmography
5 References
6 External links

Ivete Sangalo was born of a Pernambucan mother and a Bahian father in Juazeiro, Bahia, where she spent her whole childhood. She started her singing career in events at school and then started singing at bars. Soon, she started to receive some attention and signed with Sony Music. In 1993, Sony decided to reform the Axé group Banda Eva and she was chosen as the lead singer. Her live album with the band, Banda Eva Ao Vivo, was their best-selling album, selling over a million copies. In 1997 she decided to start a solo career and in 1999 she released her first self-titled album. With lots of upbeat Bahian rhythms and axé, the album received gold and platinum certification. The following year she released another album, Beat Beleza, which also achieved platinum status.

In 2000 she released the album Festa (Party), whose title track was another major success. The single was very popular and the album got platinum certification. "Festa" was her biggest hit single up to that point and the video also received huge airplay. "Festa" ended up being the most popular song of 2001 in Brazil. Its music video featured over 20 cameo appearances by Brazilian celebrities. In 2002, she released the album Se Eu Não te Amasse Tanto Assim (If I Didn't Love You So Much), titled after her big hit that reached the first position in the singles chart. The album, which features a duet with American singer Brian McKnight, didn't sell as much as her previous albums, but was still a hit. Following Se Eu Não te Amasse Tanto Assim, she released Clube Carnavalesco Inocentes Em Progresso in 2003. It was the lowest-selling solo album of her career but it still managed to receive gold certification.
[edit]
Career revival

MTV Ao Vivo Ivete Sangalo (MTV Live: Ivete Sangalo) (2004), was a live album and included her biggest hits, lots of them never released on an album before, and some Banda Eva hits. The album earned huge sales, most of them because of the single "Sorte Grande", which was renamed "Poeira" by the public and became a big hit in parties and on the radio and also on soccer stadiums (where it was used to cheer the soccer teams). The song received heavy airplay in Brazil. The album received diamond certification and was the second best-selling album of 2004. The DVD, which included the concert held at the Fonte Nova stadium, was certified 3x Diamond, sold over 600,000 copies, and is the best-selling musical DVD in Brazil of all time (and the best-selling musical DVD in the world in the second half of 2005). Her 2005 album, As Supernovas, received triple platinum certification shortly after its release. The album was less upbeat than the others and included some songs with a 70s touch, with the big influence of Brazilian singer Ed Motta. She also included the hit "Soy Loco por ti America", a Gilberto Gil song. Ivete's cover would become the theme song of Rede Globo's soap opera América and thanks to the tie-in, the song became very popular. "Quando a Chuva Passar" was notable for being nominated at the Latin Grammy Awards, an uncommon feature for a non-Spanish speaking singer. As Supernovas also received diamond certification which consolidated her as the biggest female solo singer in Brazil.

On December 16, 2006, she performed in the biggest stadium in South America, Maracanã in Rio de Janeiro, where Paul McCartney, Rolling Stones, Kiss, Police, Rush, RBD, and Madonna also performed. She was the first Brazilian act to perform in this stadium since pop phenomenon Sandy & Junior in 2002. The concert was released as a DVD in May 2007. While her last live DVD was an MTV Ao Vivo, this new one was from the Multishow Ao Vivo brand. Her biggest career hits were "Sorte Grande" (which was renamed "Poeira" and was sung by crowds at soccer games) and "Festa".[4] "Festa" was her biggest single in airplay both on the radio and on music TV channels while "Sorte Grande" was one of the reasons her MTV Ao Vivo album was such a huge hit, being currently her most well-known song. "Quando a Chuva Passar" was also very popular.

Currently, she's Brazil's most popular female singer based on her CD and DVD sales (but Ana Carolina came close in popularity in 2006). She is one of the richest Brazilian entertainers (she even has her own private jets) at the time, having several parallel business and lucrative commercial deals. She is also one of the highest-paid concert acts. According to O Globo, Ivete asks for R$240,000 ($120,000 per concert) and a percentage of tickets sale, which makes her final paycheck R$350,000 ($275,0000) making her one of the five highest-paid solo acts in Brazil (Roberto Carlos is the most expensive, asking R$700,000 per concert). For special concerts, like the Omo free concert at Copacabana Beach and New Year's Eve concerts, the price may reach R$2 million ($1 million dollars).

Her parallel business, like her trio-elétrico and her abadá for Salvador carnival, are also very lucrative, as it is her commercial deals with companies like Avon, Grendene, Panasonic and Nova Schin beer. Her biggest singles to date have been "Festa" and "Sorte Grande" (Poeira). Thanks to Ivete, her record company, Universal, went back to the #1 most lucrative record company in Brazil, after losing the spot to Sony BMG. Her Ao Vivo no Maracanã DVD sold 555,000 copies making the best-selling musical DVD of the year in Brazil and the best-selling musical DVD overall in 2007 for Universal Records, including international acts.[5]

Ivete has sold more than 7,000,000 CDs copies and more than 1,500,000 DVDs copies. In 2008, she's about to release a children's album with Saulo Fernandes, lead-singer of Banda Eva. The CD with 11 tracks will have as single the controversy "Funk do Xixi" (Pee's Funk). The video with Ivete singing the song at a solo show is available in the internet.

On September 8, 2009, it was confirmed that Sangalo will be opening R&B singer-songwriter Beyoncé Knowles' concerts of her I Am... Tour in Brazil, in the cities of São Paulo and Salvador, Bahia.[6] 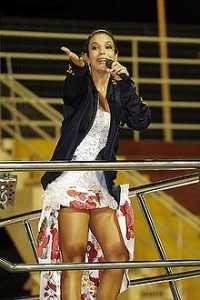