&quot;At first I harass them, then I murder them&quot; [x2]

Last night pigs rushed my crib and found a carcass

But I walked free regardless

My trigger finger got stamina

You mess around and I'll BLAM BLAM in ya

Ramming your body parts down the cindering slots

I'm chopping your off then drop your pieces off a rooftop

Creator of the murder data

I murder, then I see you later

Living dead, stomping the streets of Brooklyn like a zombie

I come to eat your brain like a piece of salami

Cause I'm a sick bastard

And they obey everything I say, no question

Mr. Ill Bill brings your body to the blood feast

Bodies, on top of bodies I instigate mutilation

2000 maniacs locked in my building

I get hyper with a butcher knife and a hash pipe

But pack with parts all my brain cells apart

Assorted body parts I'm starting to stab and chop up

Cover the floor with plasma, then I mop up

Unless I get dressed to kill when I spill

Chop chop then pop, with the glock

All of a sacrifice

Crematoria people sleeps in a glancing

undead, humanoid end of the sent a laving

directs me, infects me

condemns me to the Brooklyn floors

make nice, nice since I got a nadge to grind

I blind kids by poking out their eyes with my knives

you painted my face, popsicles to my brain

girls get on top and ride this wave from,

beyond the graves, slash in a bloodbath

zombies arrive, and you'll all be adopted

strapped with gats so - step - BACK

I been twisting fresh hits and grotesque contorsions

I use a chainsaw, when I'm performing an abortion

I stack up bodies so back up , before I make my hatchet hack up,

and use your life's blood to grease the track up

Make your brain madder flatter and survival's rather doubtful

Blood everywhere and your hardly even breathing

there's no tomorrow I'm the harvester of sorrow

Bizarre, strange, got maggots in my brains

Draggin souls down to hell, burn burn in the FLAMES

Thanks to Non Phixion Fan for these lyrics 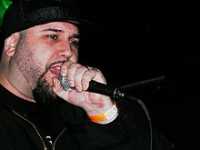