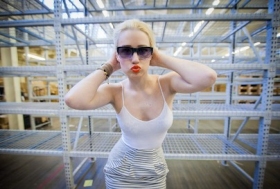 The 21-year-old Los Angeles-based singer raps her haters, with no major difference from Nicki's rhymes: "All you do is dream like you was Christina Mili/ I'm sorry Nicki, but these hoes disrespecting hard/ Had to address the nonsense, here's a postcard."

Recently, it was confirmed that Iggy is dating A$AP Rocky, and that she is possible to be signed to Def Jam.