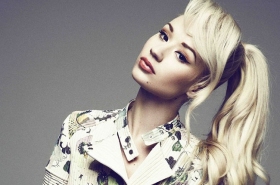 The Island Records president David Massey said “We are beyond proud and excited to welcome Iggy to the Island Def Jam family. Iggy has created a massive buzz and rightfully so: she’s incredibly talented, she’s focused, driven, and has great creative tastes and instincts. She is nothing short of an international star, and the team here -- including Steve Bartels, Chris Anokute, Karen Kwak, our chairman Barry Weiss and myself -- are thrilled she’s chosen Island Records as her U.S. home.”

Azalea expressed her excitement and said "I am elated to be a part of the Island Def Jam family! After speaking in depth with David, Steve and Chris, it became clear that Island Records was attuned to the type of artist I am. They are a great addition to my UK team. Along with T.I. and the Grand Hustle family, I couldn't have asked for a more understanding and aspirational group of people to work with.

Iggy is promoting her new single “Work” off the new album “The New Classic”.