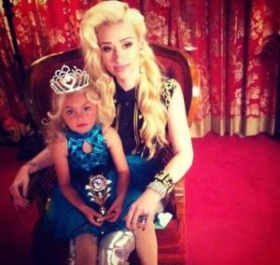 Before dropping her new album Glory, Iggy Azalea released her track "Flash", recorded in collaboration with rapper Mike Posner. While he most recently brought a chilly sophistication to Justin Bieber's hit single "Boyfriend" as the tune's co-writer and co-producer, and now the electro-R&B singer puts his sensual touch on Iggy Azalea's track.

Glory EP goes out on Sunday, July 29th. Over the weekend the Grand Hustle rapper released the official music video to her T.I. assisted "Murda Bizness," which you can watch after the jump.

For the clip, Iggy opted for a Toddlers & Tiaras scenario, where egos, excess, and cutthroat competition rule just as hard as they do in the club. Cocaine-referencing lyrics over shots of Iggy pushing Pixy Stix still unnerve us in the way everything about that show does, but Iggy's probably just taking her cues from the real honey boo boo children of the world — don't think we didn't see that little beauty queen taking a swig of her special juice, Iggs.