Guerilla Maab - 2 All You Hoes lyrics

[talking] Hey Rocko, what it do, shit word On the streets, motherfuckers Say we ain't as raw as we use to be Or ain't got it like we use to have it Them motherfuckers must ain't peeped them Last two albums, for real, dick riders [Hook x2] All you hoes, talking down Guard your grill, keep moving around On the real, it's going down Fucking with us, you'll be laying it down [Trae] I'm finna to make you feel my wrath Fucking guerilla niggaz, living the stretch Ready to bust all of my enemies When they living the life so shife, and knowing it ain't right How the fuck did you leave a nigga with love, out to dry Man I thought that we was suppose to shed blood for eachother Get on the grind, and break bread with eachother And now you wanna plex, and you keeping it undercover I'm a hundred percent real, ain't never gon be another Nigga like me, can you imagine what I be going through When a nigga starts to go bad, and niggaz wanna turn around So now I'm walking around, strapped with a frown Move around, bitch it's fin to go down It ain't gon be no more talking down, you walking a thin line Cause now the Underdawg, gon make a nigga respect mine You don't really wanna know, what's going on inside mine You an't fuck around, until you deal with a flat line Guerilla Maab for life, and that's my word On the verge of doing a nigga raw You better believe I'm gonna make it regardless, what a nigga say And ain't too many niggaz, that'll fuck around with the Trae I'm one of a kind, I stay on the grind I gotta get mine Me and Rocko and Dougie, all them niggaz hate that Better get on the corner, thinking you better back back Fore' I street sweep the block, with a guerilla attack Nigga tell me how you love that, I'ma surviving nigga That's never gonna turn back, blessed with a tact To make a nigga wanna feel that, living effect A lot of y'all can't take that, gotta pray to God I'll forever be strong, until the end of my living When I'm giving I'm all alone, Lord no doubt I wanna fall off in my zone, cause too many niggaz Making a nigga wanna do wrong, you better be gone [Hook x2] [Dougie D] I'ma put it to you motherfuckers, having no rest Snapping necks, a motherfucker that be bumping they gums Talk down, making motherfuckers move round You moving too fast, you make a halt, hold up and slow down Fa sho now, steady be rocking steady, we jamming it with this We touch, we still slamming the bitch Take time for a nigga to shine, and get rich In the meanwhile, I'ma collect all my chips Putting it in they motherfucking face, mm-hm Thought we was gon give up, now bitch what Dougie and Trae, a cold coming at you on display And breaking em off, is the Guerilla Maab way Do I really wanna play game, ah naw Come in we gon stop, and press pause Breaking a jaw and fade the law, and do it raw Teaching motherfuckers a lesson, that they never saw They gon learn by that, gripping a glock now tilt they hats back Fucking with us, get your man some contact Better believe that every word I say, look bitch I meant that I'll ride on a hoe, keep my gun on squat and get throwed Ain't nothing but Dougie, Trae and Rocko doing what we do Up on the low-low, fa sho though, you know That it's gon go down, keeping it crunk, blow up and shake round Fuck boys up, and make they hoe mine Just let pussy marks, lay it on down Better believe it, I'm run right in it, just won't stop until I get finished Bumping lips, they always get splitted, and when they get splitted You know we done did it, talking on down get you hit in a minute [Hook x4] All you hoes, talking down You gonna be laying it down On the real, it's going down You gonna be laying it down All you hoes, talking down On the real, it's going down You gonna be laying it down 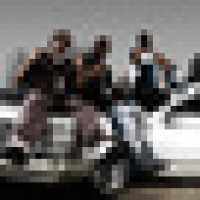