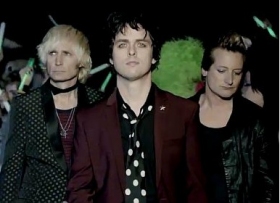 Rock musicians from Green Day are urgin g their listeners to "shoot the f-cking Dj" in ther newly premiered clip "Kill The DJ", the band's latest single included on their ¡Uno! album. The video comes out at the same time with reports about Billie Joe Armstrong which was rumoured to be hospitalized due to illness.

The punk rock band consisting of Mike Dimt and Tre Cool in addition to Armstrong first performed the dance music in front of a surprised crowd in Los Angeles' Echoplex. In these black-and-white visuals, the trio is seen riding motorcycles separately in a desert. The footage cuts to a club scene where men and women are partying, while the members of the band walk in between them to make it to the stage. A couple of seconds later, two women fight in front of a man wearing an animal suit, and the dancers are covered in blood.

¡Uno! will be released in the United States on September 25, November 13 and January 15 respectively. According to Billie Joe, the song is straight-up dance music and has a four-on-the-floor type of rhythm. Watch here Green Day's new clip "Kill the DJ".

Green Day will perform this September 6 on the stage of Staples Center for the 2012 MTV Video Music Awards. Despite Billie Joe's hospitalization, the band will perform as scheduled. They are joined in the lineup by Taylor Swift, Alicia Keys, Rihanna, Nicki Minaj and One Direction.