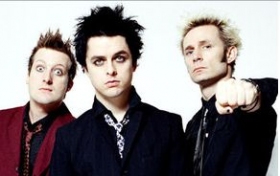 While Green Day have already secured their spot on rock's Mt. Olympus, they are back now with the premiere of their video supporting ¡Uno! single titled "Oh Love", a single which sounds incredible good. On the evening of August 15th the band premiered it on MTV News. The clip features a bevy of beautiful models sitting around a studio as Green Day walk in to perform the punk-tinged ballad. Frontman Billie Joe Armstrong straps his guitar on first and starts belting out the tune. He's then followed by Tre Cool, who starts pounding his drum kit, and finally Mike Dirnt, who grabs his bass guitar to provide the low-end of the tune.

¡Uno! is the first of a trilogy of discs that also includes ¡Dos! and ¡Tre! and will be released on September 25th.

At the same time, Green Day were announced also yesterday to be joining the list of performers at the 2012 MTV Video Music Awards, which takes place Sept. 6 in Los Angeles.

On top of that, Green Day recently unveiled "Kill The DJ", the second track to be taken from the band's new album ¡Uno!.