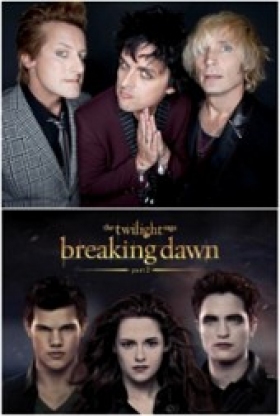 Green Day just released their new music video "The Forgotten" on October 30 on MTV, even though the band has canceled their 2013 tour dates due to Billie Joe Armstrong rehab treatments.

"The Forgotten" is a song the band wrote for the final film of Twilight Saga: Breaking Dawn — Part 2 Soundtrack. The single is a piano-based ballad and will be out on November 13, where also features new music from Passion Pit, St. Vincent, and POP ETC.

The music video includes frames from the movie "Breaking Dawn II" where we can see Bella Swan (Kristen Stewart) along with the her husband (Robert Pattinson), and their daughter, Renesmee (McKenzie Foy). All the images reflect Bella Swan's new perspective and the love that she shares to her new family.

"Where in the world's the forgotten/ Like soldiers from a long lost war," he continues. "We share the scars from our abandon/ And what we remember becomes folklore."

"When we were asked to be part of the 'Twilight: Breaking Dawn Part II' soundtrack, we readily agreed because the films are an insane cultural phenomenon, and we have always been impressed with the way the 'Twilight' soundtracks are so carefully curated," said bassist Mike Dirnt.

Watch "The Forgotten" video music below.