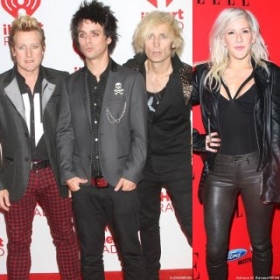 Green Day will contribute with a new track on the soundtrack to the new fild Twilight: Breaking Dawn -Part 2.

The tracklisting for the movie's soundtrack album was announced on October 4, and the punk band's contribution is called 'The Forgotten'. The punk trio will sing alongside songs by Ellie Goulding, Christina Perri and Passion Pit.

The bassist Mike Dirnt declared to Yahoo!Movies: "When we were asked to be part of the Twilight: Breaking Dawn - Part 2 soundtrack, we readily agreed because the films are an insane cultural phenomenon, and we have always been impressed with the way the Twilight soundtracks are so carefully curated."

The Twilight actress Nikki Reed - who plays Rosalie Hale in the fantasy franchise, will also perform a duet with her husband Paul McDonald titled All I've Ever Needed.

The Twilight Breaking Dawn -Part 2 album is released on November 13, and the film will be out on 16 November.

The full track listing is as follows: