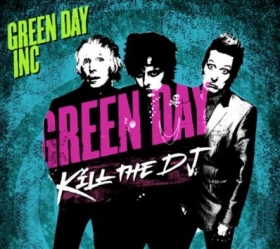 Green Day have recently released another track off their upcoming ¡Uno! LP which is titled "Kill the DJ", and it sounds more pop-dance then we've expected. It has a similar lyric: Billie Joe Armstrong just repeats, over and over again, "kill the DJ" .

Throughout their career, Green Day has been accused of either paying homage to or inadvertently (or perhaps, quite purposefully) lifting melodies or riffs from other hit songs — see "Boulevard of Broken Songs" to discover how close "Boulevard Of Broken Dreams" is to Oasis' "Wonderwall".

The band previously perform the song live during their recent gig at the Echoplex, and it looks like the studio recording is sans expletives. Not amazing… but certainly more fun than first single "Oh Love." Armstrong told Rolling Stone the DJ in the lyric is actually just "static and noise … Like this government cannot, will not, agree with itself. They refuse to make it work. Right, left –- it doesn't matter. It blows your mind and pisses you off. It's a song about being drunk, going through this chaos, feeling fucked up and all you want to do is get more drunk."