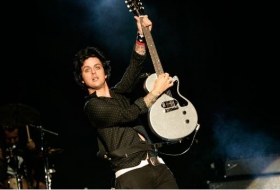 While two days ago Green Day debuted a new track for the new version of Angry Birds game titled "Troublemaker", recently the band have confirmed their appearance at the Reading Festival this weekend. Their are set to perform their seminal 1994 album "Dookie" in full. "Troublemaker" will be included on band's first upcoming album off upcoming their much-announced trilogy, ¡Uno! (out September 24).

The band also revealed that they will be embarking on a UK tour next year, kicking off with a show at Emirates Stadium in North London on June 1. The band broke the news earlier this evening on Radio 1. The pop punk veterans are currently in the UK as part of a short European tour, and earlier this week announced a show at London's O2 Shepherd's Bush Empire today (August 23).

The first hint that the band would be appearing at Reading Festival came when Billie Joe Armstrong wrote on his Twitter feed: "Hello England! What rhymes with shredding??!!" It will be the band's first appearance at the festival since headlining in 2004.

Green Day then play another surprise show at Le Trianon in Paris on Monday (August 27). Green Day release the first part of their three-album series '¡Uno!', '¡Dos!', '¡Tré!', on September 24. Last week, the band debuted another track from '¡Uno!' - 'Kill The DJ' - and have promised more surprises as the sequence unfolds.