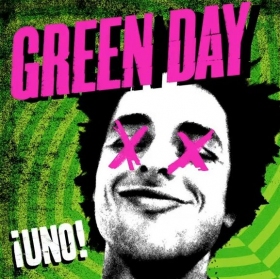 One day after announcing their next single, Green Day have now unleashed the tracklist of their 4th album ¡Uno! the first one from the album trilogy ¡Uno! ¡Dos! ¡Tré!. Previously, the band has unveiled the album artwork for ¡Dos! - pretty much similar to the ¡Uno! cover, and also set July 16th the date for the release of "Oh Love" single.

Aside from the album title, there appear to be no tracks en Español on ¡Uno! but one track seems to be in Latin "Carpe Diem"! The band recently tweeted that the album was finished, along with this photo of the completed trilogy.

Frontman Billie Joe Armstrong recently called the band's forthcoming trilogy of albums "a crazy idea that happens to be working really well." Speaking to Rolling Stone, Armstrong also explained that the new albums will be "power pop". Oh, sounds interesting! He said of the band's musical direction: "We wanted something punchier, more power pop – somewhere between AC/DC and the early Beatles."

Green Day will play headline shows at Japan's Summer Sonic festival and France's Rock En Seine in August and a headline slot at I-Day festival in Bologna, Italy on September 2 as well as three shows in Germany in late August.