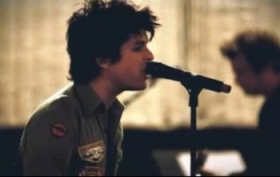 A glitter 'n glam music vieo has been premiered via Yahoo Music! by the rock band Green Day supporting their song "Nuclear Family". Instead of performing in front live screaming fans like a usual performance video, Billie Joe Armstrong and his fellow bandmates are seen playing their hearts out for an imaginary crowd while rehearsing.

As previously mentioned, "Nuclear Family" is taken from their trilogy album "Uno!", "Dos!" and "Tre!" which will be released in the United States on September 25, November 13 and January 15 respectively. The album has already been preceded by two singles "Oh Love" and "Kill The DJ".

Green Day are currently on the road to promote the upcoming effort, but recently took a brief break when Billie Joe was sent to hospital. Despite the health issue, the band performed at 2012 MTV Video Music Awards on September 6th as scheduled.