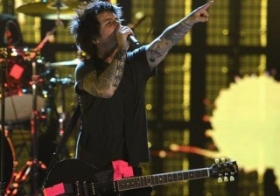 Forced to cancel their show in Italy last Sunday (Sept. 2), the American punk rock legends Green Day have recently given an update on their frontman Billie Joe Armstrong's fight with illness, now in hospital.

Armstrong was rushed to hospital on the weekend after coming down with influenza and severe dehydration, leading to their Italian gig on Sunday being cancelled. Green Day aren't a band known for pulling out of a show, and despite the severity of his illness, Armstrong is unhappy that he wasn't able to perform. But, like his bandmate Mike Dirnt explained - its pretty hard to sing when you're constantly throwing up!

Speaking to MTV News, Dirnt said: "Billie came down with heavy, heavy dehydration; it was like severe dehydration, influenza, and it was just a really, really bad situation. He woke up in the morning and it was bad. Let's put it this way, if you're in your hotel room and you're vomiting profusely, it's not fun. So what are you gonna do? It's hard to sing while you're puking."

Dirnt then reiterated that him and his band weren't a flakey bunch, and would be returning to Italy to make up for the cancellations as soon as they could. "We're going to make our way back to Bologna and play that show ASAP. We don't miss many shows; we've maybe missed five shows out of our entire career and we pride ourselves on that, but we're human."

The world-beating rockers will return to the UK next summer for a massive stadium show in London's Emirates Stadium.

Last week Green Day announced a huge UK stadium show for next summer. The trio will headline London's 60,000 capacity Emirates Stadium on June 1, 2013. Tickets for the show will go onsale at the end of next month on September 28.