Alicia Keys and Green Day's performances for the 2012 MTV VMAs 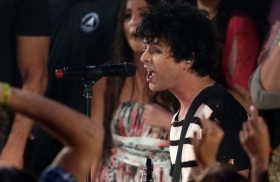 Besides Rihanna, the Billie Joe Armstrong-fronted band Green Day made a rocking appearance performing their new sinle "Let Yourself Go" for their fans at the Staples Center on Thursday night (Sept. 6th). The band performed for the first time after Billie Joe was released from hospital. Earlier in the evening, Billie made quite a statement by saying, "Always speak your mind, always speak the truth, no matter the cost." The statement was in response to Pussy Riot's video sent to MTV to thank the band and the likes of Madonna, Bjork and Red Hot Chili Peppers for their unwavering support.

Before taking the stage, Armstrong told MTV News on the carpet: "I'm doing better. It was a little rough," adding with a sly smile, "But when you get a parasite inside your body — I've always had a parasite inside my body. This time he decided to dance a little bit more. We're going to create a little chaos tonight, though. It's going to be fun."

Another songstress Alicia Keys, meanwhile, took the stage to perform her latest single "Girl on Fire" live for the first time. Starting it off solo, the wife of Swizz Beatz was joined by Young Money femcee Nicki Minaj who delivered the rapping part. At the same time, the U.S. gymnast Gabby Douglas also appeared on the stage to show some of the moves that earned her a gold medal at London Olympics.

Taylor Swift also took the stage at 2012 MTV VMAs to perform her new song "We Are Never Ever Getting Back Together". Watch her performance below.