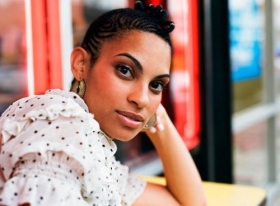 The Soul songstress Goapele has released the music video for her latest single called 'Play'. The clip is shot in black and white and features shots with model Goapele, some mysterious men, fire eater, a snake and a dancer. The music video was directed by John Mazyck and Dahveed and the track itself was produced by Electric Thunderbolt.

We totally love it and you may check it out below.

'Play' is lifted from Break Of Dawn album which is due October 24.