GIL SCOTT-HERON - Message To The Messengers

Hey, yeah, we the same brothas from a long time ago

We was talkin' about television and doin' it on the radio

What we did was to help our generation realize

But if you're gon' be teachin' folks things, make sure you know what you're sayin'

Older folks in our neighborhood got plenty of know-how

Remember if it wasn't for them, you wouldn't be out here now

And I ain't comin' at you with no disrespect

Because if you're gonna be speakin' for a whole generation

And you know enough to try and handle their education

Be sure you know the real deal about past situations

...Sometimes they tell lies and put 'em in a truthful disguise

They don't know what to say to our young folks, but they know that you do

And if they really knew the truth...why would they tell you?

The first sign is peace, tell all them gun totin' young brothas

We raised too much hell when they was shootin' us down

All your 9-millimeter brothas...give them somthin' to think about

Tell them you heard that this is the new word, they got to work that stuff out

They feel real independent...but they just pullin' contracts for the man

But if they really knew the truth...why would they tell you?

And if they look at you like you're insane

Or that white folks had finally co-opted your game

Or worse yet implying that you don't really know...

That's the same thing they said about us...a long time ago

Young rappers, one more suggestion before I get out of your way

I'm sayin' protect your community and spread that respect around

Tell brothas and sistas they gotta calm that bullshit down

And they ain't got to hang out with the senior citizens

And we know who rippin' off the neighborhood, tell them, “That BS has got to stop!”

Tell them you're sorry they can't handle it out there

But they got to take the crime off the block

And if they look at you like you're insane

Or that white folks had finally co-opted your game

Or worse yet saying that you really don't know...

And if they tell folks that you finally lost your nerve

That's the same thing they said about us, when we said, “Johannesburg”

But I think the young folks need to know, that things don't go both ways

And you ain't said no words that I haven't heard, but that ain't no compliment

And if they look at you like they think you insane

Or they call you scarecrow thinkin' you ain't got no brain

Or that white folks have finally co-opted your game

Or you really don't know...They said that about me a long time ago

That's what they said about Johannesburg

You ain't insane...you have got a brain

You haven't gone lame; you have got your game 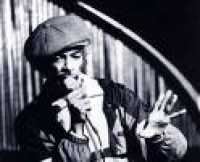