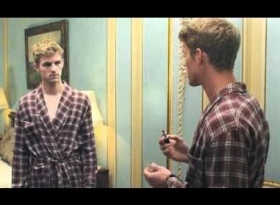 Foster The People have premiered their new video supporting the latest single 'Call It What You Want' which is by the way, an awesome clip and comic the same time.

Visuals features the band in a number of unusual scenarios: luscious ladies lying on the couch or on the floor in a mansion, there's a key sequence that finds a series of women wearing T-shirts that spell out FOSTER getting shot in the chest and bleeding blue paint, a huge gold fists nudged up against a bandmember's face, scenes with all the scrap paper all over the floor... nothing seems to make sense.

In one comical moment, drummer Mark Pontius says to himself in a mirror, "Something's missing" as his reflection then kindly hands him lipstick, which he puts on. "Now kiss me," Pontius' reflection says back to him.

Check out Foster The People's video 'Call It What You Want' in here:

'Call It What You Want' is lifted from band's hit album Torches.