Franny J. Crosby was an American hymn writer and poet, writing over 9,000 hymns during her lifetime along with many secular songs, cantatas, and lyrical productions of various kinds. During the era of “gospel song” (1870-1920), Fanny Crosby’s popular ballads reigned supreme. Her hymns are still sung today all over the world.

Franny was born into a poor family in Putnam county, New York on May 24, 1820. She became ill as an infant, causing her eyes to inflame. Living in a small town where there was no doctor, the family was desperate for help. A stranger, claiming to be a doctor, treated Fanny, putting a police on her eyes, claiming it would draw the infection out. Instead, as her eyes cleared, white scar tissue began to form over her eyes, and Fanny was to remain blind the rest of her life. A few months later, Fanny’s father fell ill and died.

These tragic events might have scarred most children for life, but it was not so for Fanny. Her mother had to find work, so she left Fanny with her grandmother, Eunice. Eunice was determined that Fanny wouldn’t grow up to be helpless. She wanted the girl to learn to be independent

and capable of supporting herself. Eunice verbally taught Fanny all about the world around her, describing her surroundings in great detail. This led Fanny to have a great love of nature. She also required Fanny to exercise her mind by having her memorize the entire Bible, along

with poetry of the day. This store of knowledge would help Fanny the rest of her life.

While she does not rank with the great poets of her day, her songs have reached many hearts where more stately productions would not have gained admittance. Her mission has been a noble one and well performed: “To rescue the perishing, care for the dying.....tell them of Jesus, the mighty to save.”

Her talent for writing verses showed itself when she was not more than eight years old, and every year since has seen something from her pen. All these have been written in her blindness and many of them, so full of joy and hope and light that it’s hard to remember they were written in darkness. 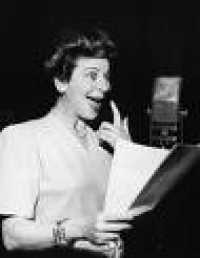