Family Force can be heard at their spot of myspace.com there music is pretty heavy, if you like something with heavy guitar riffs and rap you will love this

A phoenix rising from the ashes of the Dirty South, Family Force 5 creates a lethal mix of punk, rock, funk and mind-altering grooves that’s guaranteed ghetto music straight from the heart cut with a healthy dose of fried grits.

Formed 2 years ago in Atlanta, Family Force 5 redefine Rock from the South, combining OutKast with Rage Against the Machine and beastie Boys with the White Stripes.

Imagine Rick James fronting the MC5 or Ronnie Van Zant as lead singer for the Gap Band. No other band mixes new wave guitars with the nasty groove that can only come after a lifetime diet of fried chicken and collard greens.

Nathan Currin (a/k/a Nadaddy) mans the decks and plays the keys. Brad Allen (a/k/a 20 Cent) plays guitar and often hangs from the ceiling. Family Force 5 play a set loaded with Hits of the Future: Kountry Gentleman, Drama Queen, X-Girlfriend, Earthquake and many others are coming soon to a radio station and video music channel near you.

Family Force 5 must headline almost every gig because their fearsome reputation has spread around the South. They’ve blown away the likes of Alter Bridge, Velvet Revolver and the Cure as an opening band and any headliner with an ounce of sense now knows that it’s fatal to follow Family Force 5.

Family Force 5 have turned down exclusive endorsements from both the Varsity and Krystal that would play their music continuously in each chain’s restaurants because the band believes that EVERYBODY deserves the chance to rock their grooves, not just the customers of the finest eating establishments in the South.

Family Force 5 will come to your town and burn it down, making any rock club feel like it is Ladies’ Choice at the Roller Rink.

Don’t miss your chance to see, to hear, to experience the righteous crunk rock that Family Force 5 can bring to your life. See them now and say forever that you knew them when. Nu South Rising. The world will “shake like an earthquake” with Family Force 5. Peace out peeps. 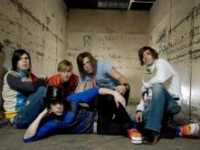