Folks new to Evanescence fandom may be surprised to learn that Ben Moody and Amy Lee, the founding members of Evanescence, met at church camp. I interviewed Ben in 1998 and here's how he characterized the meeting:

Several years ago Amy and myself were attending a youth camp. I was playing with the praise and worship group and Amy was a camper. During some kind of break/recreation time I was sitting in the gym watching a basketball game. On the other side of the court was a stage for plays and a piano. I was just sitting there bored to tears when all of the sudden I was given a quick jolt as my ears were filled with the sound of the piano intro to Meatloaf's "I Would Do Anything For Love."

I looked over at the piano and there was this girl effortlessly displaying emmence amounts of talent. After my initial envious rage subsided I hopped to my feet and ran right through the basketball game straight to the piano and introduced myself.

She then impressed me further with songs that she had written. I thought I was in heaven. But then she sang. I nearly died. coming from this tiny little youth camp reject was one of the most powerful, beautiful voicies I'd ever heard. So I somehow convinced her to never play with anyone else again and she's been mine ever since.

Ben and Amy soon began recording songs like "Give Unto Me" and "Understanding" under the name Evanescence. With such influences as Type O Negative, Living Sacrifice (who, rumor has it, once asked Ben to join as guitarist, but he turned them down to continue focusing on Evanescence), Portishead and Sarah McLachlan they began to craft a unique sound that took in elements of metal, electronic music and (probably without intending it) goth rock.

Brad Caviness started to play "Understanding" and "Give Unto Me" on the radio show he co-hosted on KABF in Little Rock, giving Evanescence their first exposure to the world at large.

Their debut EP was released in December of 1998 at their first show (to my knowledge) at Vino's in Little Rock. The run of 100 CDRs sold out quickly that night.

At some point David Hodges joined the band on keys , but I can't give you any details on that because I don't know how that transpired. I can say that those close to the band were in shock, as Ben Moody is a notorious perfectionist who has a hard time finding anyone who he feels comfortable playing music with.

The Whisper EP was released around this time by the band with help from BigWig Enterprises on CDR (limited to 50 copies).

In time the Evanescence live show was rounded out with such members as Will Boyd (the Visitors) John Lecompt (formerly of Mindrage, currently of Kill System) and Rocky Gray (of Soul Embraced, Kill System and Living Sacrifice).

Recently David Hodges has parted ways with the band, hoping to return to his musical roots and start a new band in the Christian market. Rumor has it he and Matt Outlaw are currently writing songs for this project. John Lecompt and Rocky Gray are now considered full-fledged members of the band.

This band, once only know to us lucky few, has taken the world by storm. Their major-label debut Fallen on Wind-Up Records, home to bands such as 12 Stones and Drowning Pool has gone 5x Platinum in the US alone. The overpowering sounds of Evanescence have definently set them apart from any other band in 2003, and have won them many awards to include two grammys! However with all their success, also came lots of disappointments. With the loss of Ben Moody the question on everyone's mind is with 2/3'rds of the original band now gone will Evanescence be able to pump out an even better sophmore album? I guess only time will tell! 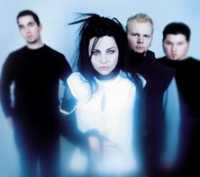