Eddie Izzard - Being For The Benefit Of Mr. Kite lyrics

For the benefit of Mr. Kite

There will be a show tonight on trampoline

The Hendersons will all be there

Have you seen it? It's great. They got stuff.

Over men and horses hoops and garters

Lastly through a hogshead of real fire!

In this way Mr. K. will change the world!

With the blue people! They're great! They're just... chilled out!

Performs his feat on Saturday at Bishopsgate.

Nice neck of the woods.

The Hendersons they're gonna dance and sing

As Mr. Kite flies through the ring don't be late.

Their production is second to none baby.

And of course Henry The Horse gonna do the waltz!

Oh you gotta see it, it's genius! I mean she's ready, she's got the stuff and movement and waltz. Horses how do they do that

stuff? You gotta give her sugar, you know, and shes called Henry and it's a lot of explanation but don't worry about it kids.

Just tune in, turn off, drop out, drop in, switch off, switch on, and explode.

The band begins at ten to six

When Mr. K. performs his tricks without a sound

And Mr. H. will demonstrate

Having been some days in preparation

A splendid time is guaranteed for all

And tonight Mr. Kite is topping the bill baby! Across the universe.

It's me! I'm on top of the bill! I spent years getting to this point! I'm bloody brilliant. This is golden, you gotta see

what I do man. I got horses, and dogs, and cats, and monekys, and blue people. It's just, it's such a collection. I spent

years putting it together. You gotta watch it. You gotta see it. It's me. In the thing! Yeah! 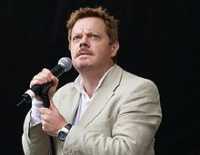