[Recorded instrumentally by John Petrucci for a student, before ]

[Images And Words was released. Chris Collins, one of Dream ]

[Theater's earliest vocalists got a hold of the tape and decided ]

[to add some vocals of his own to the background music. ]

It's all the same, only the names will change

Everyday it seems we're wasted away

Another place where the faces are so cold

I drive all night

Sometimes it's not {man, give it a rest} for days

And people {you suck} I meet always go their separate ways

Sometimes I tell the day

By the bottle that you drink

on a steel horse I ride {bah}

Cause I'm a cowboy,

on a steel horse I ride {yeah ride this you faggot}

Well I walk the streets {what are you a prostitute?},

a loaded six string on my back

{yeah I bet you got something else on your back}

I been everywhere {everywhere},

And I've rocked them all

Cause I'm a cowboy {cowboy},

I'm wanted {wanted} dead or alive, and all right {yeah!}

{John man give me a gun} Dead or alive

{personally thank Bon Jovi and Richie Sambora for their }

{uh, effort in this project, and personally I've got a } 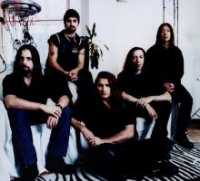