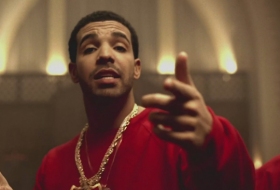 With powerful scenes of nature and sensitive moments between the two singers, Drake's new clip featuring Rihanna "Take Care" finally has gone viral. The clip debuts with Canadian rapper singing his verses, while later is joined by Ririh and share some cozy moments together. Slow-motion images of a restless bull, a gracefully-flapping bird, a snowy landscape and a lithe male dancer are also featured in the video.

Drizzy explained the concept of the "Take Care" video to Capital FM, "It's all basically the ups and downs of a relationship but represented in icebergs and fire and animals and just pulsating movement and then you've got me and Rihanna very intimate - kissing, hugging."
Calling the video "very artistic" and "very abstract," the Canadian rapper elaborated his explanation, "There's actually for once no story necessarily as far as there being a narrative like 'What's My Name?' or 'Find Your Love' where there's stories. This is just beautiful imagery." It is a completely different work from what we would expected from Drake! Enjoy the music video in here.

Almost at the same time, Drake released the music video in support of his single-collaboration with Lil Wayne "HYFR", in which he takes his fans inside the rapper's actual Bar Mitzyah as a kid and as an adult. "On October 24th 2011 Aubrey 'Drake' Graham chose to get re-Bar Mitzvah'd as a re-commitment to the Jewish religion," so it's explained.