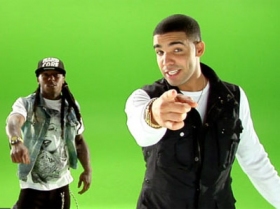 Rapper Drake has debuted a music video in support of his latest single "Miss Me", single that is taken from Drake's debut album Thank Me Later. The music video was directed by Anthony Mandler, it features the Canadian rapper rapping his verses in a room with a woman shaking her hips seductively in front of him. Lil Wayne's footage which was filmed before he went to jail is also included.

This seems to be the perfect time to have Weezy appearing on the small screen since the rap mogul has gone for quite long time to serve his jail time.
Drake commented, "It was something not a lot of people expected me to do, especially with Wayne being in the situation he's in. We did it as a team, held Wayne down. All the Young Money big dawgs came down - the men of Young Money - to show the muscle, to show we still in full effect."