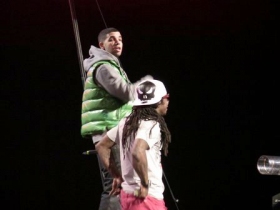 Drake's upcoming album Take Care will hit the stores in two weeks, on November 15th and recently, but he recently delivered on Power 106 a bonus track called 'The Motto' which features rapper Lil Wayne.

Produced by T-Minus, the track opens with Lil Wayne rapping about himself as being "the f**king man" cause he is loved by Spanish girls. He then makes sure people knows he is young and has lot of money: "Twenty five sittin on 25 mil/ I'm in the building and I'm feeling myself /Rest in peace Mac Dre, I'mma do it for the Bay". Drake joins him in the same notes and spits verses on how they enjoy life with the girls, cause "You only live once: that's the motto, word to Yolo". This is Drake's second collabo to Lil Wayne from his Take Care album after the recently release 'The Real Her'.