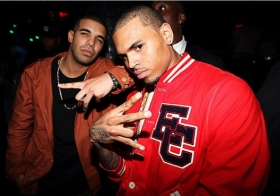 While Chris Brown released the song several years ago in a solo version, recently an unreleased version of the "Yamaha Mama" single featuring Drake made its way online. The track which was originally a Soulja Boy and Sean Kingston collaboration appearing on 2008's iSouljaBoyTellem, it is now time that the two crooner to shared their passion for ladies in a new version.

Apparaently, it ain't a new track , just a version we've never heard and we love it. Drake opens up the song with his verses, an anthem dedicated to his woman:
"Listen girl, you so bad and you single/ What's this I hear, we ain't met yet/ My name Drake and I'ma take the world over, this my year./ This I swear, had my share of women that I been with/ I'm young, can you blame me./ I know you feel like a lot of things off limits/ At least let me describe what it can be." Chris Brown sings track's chorus: "From the east to the west, scream for me if your my number one lady/ Take a lead from the race, you can go fast speed it up for me baby/ I'ma a G, what's next? One night with me would drive you crazy (crazy)".

The track was produced way back in the day by Polow Da Don, and, if not a fan of either iteration, you will like the way Drizzy and Breezy interpreted this one. Check it out below.