Drake's duet with Nicki Minaj - Up All Night (New Single) 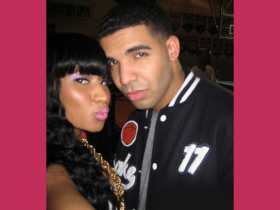 Following the leak of 'Fireworks' and 'Light Up', another song from Drake has appeared everywhere on the web. While the two previously-leaked songs have the Canadian rapper joining forces with Alicia Keys and Jay-Z, this new one titled Up All Night features Nicki Minaj on the hook.

All of the three tracks are listed in Drake's forthcoming first studio album Thank Me Later which is slated to come out in the United States on June 15. Other featured guests in the upcoming summer release are Young Jeezy, T.I., Swizz Beatz and The-Dream.

Drake is currently in the middle of his Away From Home tour. In between his hectic schedule on the road, the 23-year-old rapper will perform on "The Tonight Show with Jay Leno" on June 23 and "Jimmy Kimmel Live!" on the next day.

Take a listen to the duet Up All Night below: