Drake teases 'Take Care' album with flashes of his titles 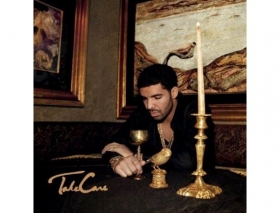 Rapper Drake decided to tease his upcoming album, but not with an exact upcoming video but with flashbacks from his older videos (with Rihanna, Nicki Minaj) and few of his titles acquired in his first three years of doing music.

The list includes "US Number 1 Platinum Selling Debut Album," "6 Grammy Nominations," "5 BET Awards," "Over 19 Million Facebook Likes," "750 Million Views on YouTube" and "Over 3 Million Twitter Followers", "3 MTV Awards Nominations", "The Hottest MC in the game by Rolling Stone", "USA GQ Man of The Year 2010" among others.

Meanwhile, songs like 'Moment 4 Life', 'Fancy', 'What's My Name?' , 'I'm On One' and 'Find You Love' are played as backsound. Also, we can hear his newly collaboration to Nicki Minaj 'Make Me Proud'. The Canadian rapper has also unveiled a cover arto for his upcoming project in which we see him sitting at the dinner table and looking into his gold goblet (see the picture above).

While watching the video teaser, just found another Drake's song newly released called 'The Real Her' which features Lil Wayne. The track is also lifted from the upcoming project Take Care set to premiere on November 14th. Listen to it below.