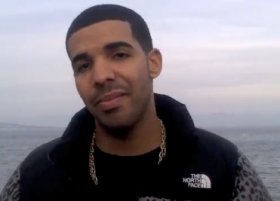 Drake premiered the music video in support of his latest Lil Wayne-featuring track "The Motto", which also includes a cameo from Tyga.

The clip was filmed in The Bay are a few weeks ago, and also features cameos from rappers E-40, Mistah F.A.B. and an unexpected shoot with the mother of late Mac Dre. "I love the Bay. I shot the Motto video out here," the Young Money rapper gushed in an interview. "It looks absolutely incredible." Talking further about the star-studded video shoot, he added, "We actually shot it on real film, a lot of people don't do that anymore."

Taken from the sophomore album Take Care, "The Motto" is a bonus track which won't likely be released as a single. Drake talked about his future projects, telling he is working on a new video for "Take Care" single. "So we're working on definitely the 'Take Care' video, which we're trying to get shot soon and a couple of other ones, too, off the album." He added, "I want to make it perfect ... so I'm just taking my time."