Drake announces Nothing Was The Same album 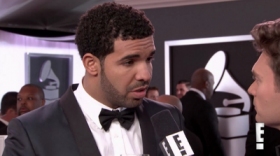 Drake announced on the red carpet of the 55th Annual Grammy Awards that his upcoming studio album, the third one in his career, will be called "Nothing Was The Same" and set to be released this summer. The rapper was interviewed by E!'s Ryan Seacrest.

Watch the interview below.

Watch Drake's newest visual for the single "Started From The Bottom" below.