David Usher was born on April 24, 1966 in Oxford, England. Besides living in England, David and his family have traveled everywhere from Thailand, to the US and Canada. His father, Dan, is an economics professer at Queen's University in Kingston, Ontario. Dan is originally from Montreal, Quebec, and is Jewish. His mother is a Thai Buddhist, who often goes to pray at the Temple in Thailand. She is also an artist.

David has a sister named Ann, and no brothers. His sister lives in Malaysia, and has a daughter named Luna, whom David is very fond of.

When David was living in Kingston, he attended KCVI high school, where such famous names as Gord Sinclair and Gord Downie (The Tragically Hip) come from. He also wore his hair fairly short in high school.

Highly influenced by "house rap" and pop, David was part of a band called, "True Hype Crue" back in the late 80's early 90's, along with Mark. In their debut video, David sports an interesting look: pony-tail, leather hat, baggy pants and a bright orange tutrtle neck. . . not to mention the ballet-type of dancing David does:-) The video for "Look" 'looks' much like the video for "Can't Touch This" by MC Hammer.

David later moved out to Vancouver to pursue his singing career and education. He attended Simon Fraser Universtity where he studied Political Science, and where he received his degree in that field. He also participated in the Music West Conference, working in the back sorting out tapes etc.

When Moist came around, David began writing constantly, and the band toured in the west, where they initially got discovered, and later, signed a record contract with EMI. David writes most of Moist's lyrics, and is highly influenced by the darker side of life. He discretley uses a lot of political themes in his writing, and starts his day waking up at 6am writing.

David is known for being a very charismatic, energetic frontman. He presents an extremely intense appearence when on stage, which is something that makes the band a really great live band. He loves to jump all over the place, and do strange things to his bandmates, like pouring water down their shirts, etc. One thing that makes David orignal and much liked, as a frontman, is his incredible soft, loud, and sexy voice.

Lately, David has been having back problems, which is why we don't see him in his 'wild' state too often. He also, in 1994, had an apendectomy, which occasionaly interfeers with the show, and prevents him from acting too wild.

In 1997, David got married to his long time New York model girlfriend, Sabrina, at his parent's home in Kigston. They now live in the downtown area of Montreal, Quebec.

1998 marked an important advance in David's career as a singer/songwriter, with his first solo album entitled, "Little Songs." Most of the album was recorded in David's apartment kitchen, and has sort of a home like feel to it. A lot of the songs sound very folksy, like "St. Lawrence River" and "F Train." Sound textures are evidently played around with in many of the songs, such as "Mood Song" add "Jesus Was My Girl."

Right now, it is rumoured that David is in the process of writing a book, probably a book of poetry, and maybe some short stories. He is also currently writing songs for the upcoming album, hopefully due out sometime in the new year! 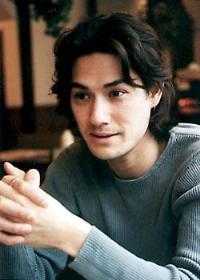