David Banner - Who's That

(Whos that peeping in my window

My folk don't understand so they don't take us serious)

Everybody wanna rap but y'all don't seem sincere

Do you realize the pain going on round here?

Think bout the things that we putting in these kids ear

As parallel to slave stories told by ..

I'm a man with a plan since fifteen on the corner

With some beats in my hand all rapped in Tehran

I was just like you, young nigga skipping school

An then I had to move

Ya God made me choose, the dope game, rap, or school

Cause it's all fucked up

That's word to my name, Now we All Skrewed UP

Bitches popping pills Now they all juiced up

And I know it sounds sick six six

Oil spills on the coast but BP STILL RICH

Katrina, now this, they tryna break our spirits

The devil in the form of a lick,

I'm sick of all my niggas praising living in slammers

Board up your window nigga, and save that peace shit for the pope

Cause there's a war going on, an it's all about dope

Am I caddy A Caddy I had to have more

Then a Pyrex visit, tryna flip a lil coke

We gotta do more than smoke

I gotta flow like Muhammad when you up against the ropes

Every verse from now on is a muthafuckin hook

For you fuck ass rappers, bent over for the soap

Star bitches in the crowd like I'm Tony Romo

I'm a man amongst women, let y'all play the bitch

Got boo on deck and to big crits

(Whos that peeping in my window

My folk don't understand so they don't take us serious) 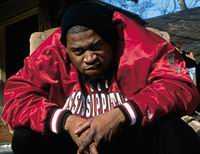