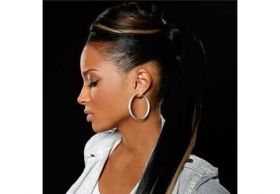 Ciara just filmed&premiered the music video to support her new single "Speechless". After grinding on the floor in slow suggestive dance moves which made her "Ride" music video banned by BET, she tones it down in this new one. Still, it explores the sexy side of her through the outfit, abs-revealing shirt.

"Speechless" is recorded for Ciara's next studio album Basic Instinct which is expected to arrive in United States on November 30. It is written by Ciara with the help from The-Dream and Christopher "Tricky" Stewart.

Beside filming promo videos for her songs, Ciara has also done a viral PSA for "It Gets Better" initiative. "You have to know that your life is in your hands," she said in her effort to empower LGBT youth. "You determine your destiny."