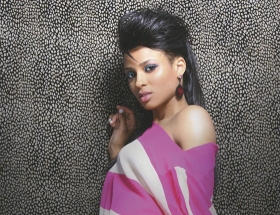 After treating fans with "sensual" feel through first single "Ride" which features Ludacris, now Ciara takes her devotees to the dance floor with an up-tempo track Gimme That. She declares her return, "I've been gone for too long, I think it's time I bring it back."

The newly-revealed song reportedly is produced by Christopher "Tricky" Stewart and Soundz. Rumor further suggested that it is unleashed as the second offering of Ciara's upcoming fourth studio album "Basic Instinct" .

The album is plotted to be released in the United States on August 17. The-Dream once claimed the effort will be Ciara's last shot at pop stardom, but he clarified his statement. The producer insisted people took it out of context after receiving backlash from her fans. Ciara herself is adamant The-Dream meant no harm.