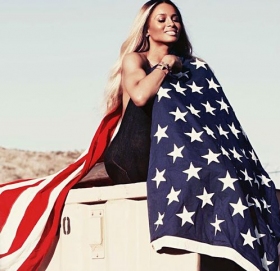 Ms. "Goodies", Ciara is back with a hot and new studio album One Woman Army and recently debuted a new track which is not on the installment, titled "Livin' It Up". The track sounds sounds simply amazing! The RnB songstress is living her life as she wants, and states that in her chorus: "I'll be playin it cool/ 'cause a girl's gonna do what a girl's gonna do/ Makin up my own rules".

At the same time, "Livin' It Up" samples Kid N' Play's "Rollin' with Kid 'N Play". To tide fans over the release of "Sorry", it was released by Epic Records via a playlist of brand-new songs sent to Cosmopolitan magazine.

Ciara "Livin' It Up" new single:

As for "Sorry", it is set to be unleashed sometime soon. It's cover art and lyrics have already been released. Hit-Boy, Jermaine Dupri, Rodney Jerkins and Tricky Stewart were some of the music makers she had worked with for the "Basic Instinct" follow-up. The album itself will arrive around Thanksgiving time (that's the fourth Thursday of November), per L.A. Reid, so stay tuned!