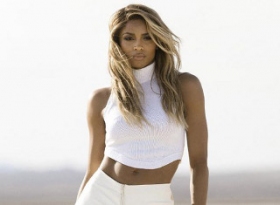 Ciara is celebrating her 27th birthday by sharing to her fans hew new video for the song "God Me Good," the second single from her forthcoming album called "One Woman Army". The singer promoted her video on the Sony JumboTron in Times Square. She looks sexy in her white sporty ensemble and she dances nice moves in the desert that you'll really love. "The dancing is like... I've been pushing more and I've been learning more about myself in that role and really experimenting so a lot of new things have come out of that."

The music video was directed by Joseph Kahn. Ciara collaborated with her dancers and “America’s Best Dance Crew” alum 8 Flavahz where we can see that energy in theirr new steps. They rocked in the desert and Ciara declared: "It was so hot, but I feel like the energy of dance and working with 8 Flavahz and my dancers just kinda kept me really upbeat. I didn't even recognize how hot it was and I thank God for the umbrella man because he also saved me."

"Got Me Good" is included in her upcoming album "One Woman Army," which will be released in 2013. The record includes features with Tricky Stewart, The Underdogs, Jermaine Dupri, Soundz, Ali Tamposi, and Livvi Franc.

Watch the video below.