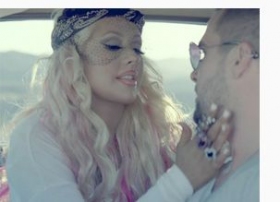 After she previously released three teasers for her new clip, Christina Aguilera has unveiled in full the visuals supporting her single "Your Body". Xtina literally destroys every single man she meets: on a desert road, in a bar or a shop.

The clip shows Aguilera in a great shape, charming and very sexy and we're not disappointed at all. And on top of that it's really fun watching her rocking those men! The clip is just pure campy glamour. As a trashy, vampy vixen living the fab life in a desert trailer park, Aguilera is all about checking in with her psychic on her old desktop computer, jumping into muscle cars with strange men and hooking up with hotties in dive bar bathrooms. Despite the killing act, the video omitted the violence by having blue paint and red confetti instead of blood.

"I worked with Melina Matsoukas on this video for 'Your Body,' who I was very drawn to because her work I saw in her other videos," Aguilera told MTV News. "It looked like she really caught a character and drew it out of them and really had a story to tell. You know, not needing or wanting or using a lot of background dancers or gimmicks or things like that."

Although her character is a bad girl, Aguilera refused to take on the title in real life. "The term bad girl should never be taken so seriously," she said. "It's definitely taken with a grain of salt, and I would never title myself as that. Maybe confident, self-assured, which is a message all women should take to heart and be themselves."

"Your Body" is the lead single off Christina's forthcoming album, Lotus, due out November 13.