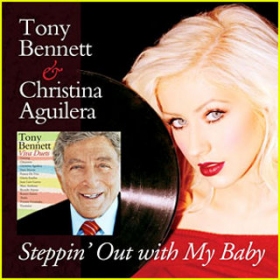 Tony Bennett shows no signs to stop at his 86 years to stop from his touring, recording, also painting. He recently recorded an album with Latin stars titled "Viva Duets", which will be due out on October 23. But Tony Bennett also recorded a new duet with "Your Body" songstress Christina Aguilera that will be included in his upcoming compilation. Their studio version is the soulful duet "Steppin' Out With My Baby", a song written by Irving Berlin and recorded for "Easter Parade" movie from 1948.

"Steppin' Out With My Baby" was recorded at the historic Los Angeles Theater, where Tony and Christina performed "An American Classic" on his 2006 NBC special. Their collaboration brings fresh air and new life to the cover. Tony makes a good team with Christina's powerful pipes and flaw.

In "Viva Duets" we can listen other performances with Marc Anthony, Gloria Estefan and many other Latin artists.

Listen to Tony Bennett and Christina Aguilera's "Steppin' Out With My Baby":