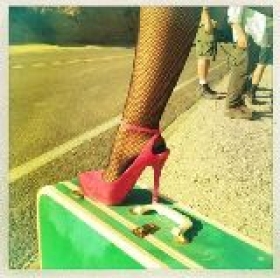 Totally unexpectedly, a brand new single from Pop songstress Christina Aguilera has leaked the web. Titled "Your Body" the song is a demo version of the Max Martin/Savan Kotecha-produced single and sounds more like a club tune that boasts steamy lyrics and sexual references. "It's true what you heard/ I am a freak, I'm disturbed...," so the judge of "The Voice" sings in the catchy hook. "We're moving faster than slow/ If you don't know where to go, I'll finish off on my own."

At the same time, X-Tina previously confirmed to Rolling Stone that "Your Body" will be featured in her upcoming seventh studio album. The finalized version of the song is expected to be released sometime in September.

The "Genie in a Bottle" hitmaker has recently opened up to her fans that she's filming a new music video. Though she didn't reveal whether she was shooting a clip to support the new single or another song, the songstress gushed that she's thrilled to get back to "artist mode."

"Its finally here- MUSIC VIDEO shoot day!!!!!!!!! Get ready guys!!!!!!!!!!" she recently tweeted from the video set. Along with it, she shared a picture that gives a look at her leg which was clad in fishnet stocking and pink stiletto heel.