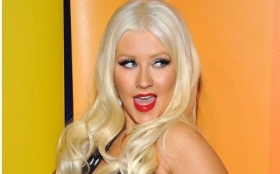 After releasing in 2010 the Spanish-language song "Desnudate" on the Bionic album, Christina Aguilera revisits in 2012 her Latin roots with a brand new song which serves as soundtrack for Will Ferrell's upcoming movie "Casa De Mi Padre".

Xtina released her first Spanish effort Mi Reflejo in 2000. She re-recorded a Spanish version of her hit singles like Genie in a Bottle and What a Girl Wants and crafted some new original materials. Through the album, she won Best Female Pop Vocal Album at 2001 Latin Grammy Awards. Listen here to Xtina's new track.

Casa de Mi Padre movie itself is a telenovela-influenced comedy which revolves around the life of a charismatic character named Armando Alvarez as a rancher, son, lover and vigilante. The lead role is tackled by Ferrell with the likes of Diego Luna and Genesis Rodriguez as supporting cast. The film is set to be released on March 17th.