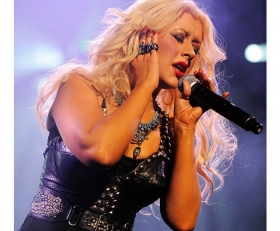 Christina Aguilera has returned to the stage for the first time since her split from husband Jordan Bratman, putting her heartache aside to perform at Justin Timberlake's charity concert in Las Vegas.

The Beautiful hitmaker filed for divorce from her longtime partner earlier this month and recently admitted she has been struggling to "get out of bed" since the painful break-up.

Aguilera shrugged off her personal problems on Saturday night to join her childhood pal Timberlake at his benefit gig at the Planet Hollywood resort to help raise money for Shriners Hospitals for Children.

Timberlake introduced Aguilera to the stage, telling the crowd, "(Please welcome) no contest, the best vocalist of my generation," and she went on to perform hits including Ain't No Other Man, Beautiful and Fighter. Read more details about her life here: Christina Aguilera - a biography.

The Timberlake show was a good warm-up for another live gig Aguilera has coming up, a November 21 appearance at the American Music Awards, where she will join a roster that includes Pink, Usher and Bon Jovi.