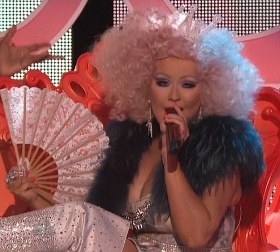 Christina AGuilera and Cee Lo Green perform "Make the World Move" during the live show episode "The Voice" on November 13.

The 31-year-old singer debuted her new single while she was wearing a pink curly afro, topped with a crown and looking like a royalty. This was the same outfit for the Halloween party. Her fellow coach Cee Lo Green performed beside Christina and impressed the fans with their great performance.

The song "Make the World Move" is another track from her newly-released album "Lotus."

Watch Xtina and Cee-Lo perform on The Voice below: